You are here: Home / Investing / Can Money Buy Happiness? Yes!

This post has been written by Janardhanan Vembunarayanan (Jana), the lucky tribesman 🙂 who recently attended Warren Buffett’s 2013 shareholder meeting in Omaha.

Dan Ariely recommended the book, “Happy Money-The Science of Smarter Spending“. I went to the public library and got the book. It is a very good read and here are my notes.

What This Book Talks About…

Most of us seek professional advice on how to earn, save and invest our money. When it comes to spending money, we follow our intuitions. Research shows clearly that our intuitions are wrong most of the times. This book explains how to get more happiness when spending our money. It uses 5 principles…

In 2010, according to the U.S. Bureau of Labor Statistics, the average American household earned about $62,000 before taxes and spent a total of around $48,000. Housing costs along came to $16,500, which accounts for 27% of the cost. This clearly shows that we spend a lot of money in housing either in the form of rent or mortgage. Does buying a big beautiful house increase our happiness?

There is almost no evidence that buying a home or a newer, nicer home increases happiness.

Between 1991 and 2007, researchers tracked thousands of people in Germany who moved to a new house because there was something about their old house they didn’t like. Immediately after settling in to their new abodes, these movers reported being much more satisfied with their new homes than they’d been with their old ones. Humans are adaptable creatures, however, and research show that people often get used to whatever they’ve got. So we might expect that this initial spike in housing satisfaction would wear off, leaving people no happier with their home than they were before moving.

But that’s not what happened.

Satisfaction with the new home only were off a little bit, and in the subsequent five years, movers remained significantly more satisfied with their new home than they’d been with their old one.

Long after the crash of 2008, almost 90 percent of Americans continued to describe home ownership as a central component of their dream.

In a carefully controlled study of more than six hundred women in Ohio, homeowners weren’t any happier than renters, though they were 12 pounds heavier.

Virgin Galactic, is a company which makes it possible for people to pre-book a ticket for a six minute spaceflight.

But wait it will cost $250,000 per person. Does this make any sense? Excerpt from the book…

As a child, Marcia Fiamengo, thirty-year-old nuclear engineer, dreamed of being an astronaut. When she and her husband John (also a nuclear engineer), first heard about Virgin Galactic, they talked about buying two tickets – when they were old and retired, since the six-figure fee was out of their price range as young professionals. Then in 2010, Marcia’s life change in an unexpected and devastating way. John became sick and passed away when Marcia received the money from John’s life insurance policy, she couldn’t imagine doing anything with it, and put it away while she grieved.

And then one day…

What better way to use this money than to honor their dream and buy a ticket to space? As Marcia put it, John’s death reminded her that “life is short and fragile” These amazing experiences shouldn’t be put off until a better time. You may never get the chance to experience them.

This story reminded me of the movie “Up”…

The point the authors are trying to make is…

Purchases which buy experience makes people more happier than the materialistic ones.

The happiness I got from visiting Berkshire Annual Meeting is much greater than the Laptop that I purchased. You see the difference.

I am standing in front of Buffett’s house 🙂 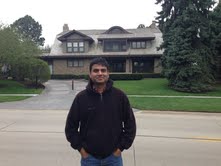 I used to drink ‘Cafe Mocha’ from Starbucks everyday. When I started drinking it used to be a treat. After sometime I did not have the same enjoyment. So why I am drinking it? It is because of the Habit. Should I spend $3.25 everyday for it, even though I do not really enjoy? Why am I not enjoying?

Because we lack mercury’s amnesia, the enjoyment of chocolate coffee typically declines over a period of time

So, what is the solution?

Switch to regular coffee at home or work. This helps to save some money. Once in a while treat myself with Starbucks Coffee and it becomes a treat for me. The point authors are making is…

Limiting our access to the things we like best may help to “re-virginze” us, renewing our capacity for pleasure. It also helps us to save money.

Today lots of professionals are making a decent amount of money. But the only problem is, most of them do not have time to do what they want to do.

At Intel an employee receives 350 emails every week. It takes 20 hours to manage them. Around 30% of the emails are unnecessary. What did Intel do?

Intel recently experimented with “email-free Tuesdays” encouraging a group of employees to spend four hours unplugged from email and phones, giving them an uninterrupted period to, you know, think.

This feeling of time affluence has important implications for happiness once these employees leave work for the day.

Google Engineers spend 20% of their time on pet projects, that are outside their day to day work. Some of the innovative products like Google Sky and Gmail came out of this.

When people at google talk about what they like, it’s one of the things they like about. It is culturally important. Knowing that it exists causes people to fee more free.

In today’s world most use credit cards, It follows the policy of “Consume now and pay later” The problem with this is, we overspend. American household had an average of more than $6000 in credit card debt in 2010. By doing the opposite – by paying upfront and delaying consumption we get the following.

Delaying consumption allows spenders to reap the pleasures of anticipation. This reminds me of my childhood days. Deepavali is a festival of lights and it is very famous in India. I anticipate its arrival one month before. The excitement I receive in the anticipation is same as the enjoyment I have during the festival.

Tripadvisor.com business runs on this pleasure of anticipation.

Barbara Messing, Chief Marketing Office at Tripadvisor.com, says: I think of tripadvisor as being in the happiness business. We are really upstream in the planning process and I believe that people derive as much pleasure from that phase as from the trip itself.

DonorsChoose.org is an online charity that makes it easy for anyone to help students in need. Public school teachers request what they need on the website. The requests can range from pencils to microscopes. Anyone can donate any amount to the project that most inspires them.

Subscribe to our best stuff on investing, stock analysis, and human behaviour. Plus get access to our Ten Exclusive E-Books on Investing + One Stock Analysis Excel. All for FREE!

Safal Niveshak is a movement to help you, the small investor, become intelligent, independent, and successful in your stock market investment decisions. Click here to know more and join our tribe of 60,000+ smart investors.